When I collected data for the book First Notes on Koma Culture (2010), I diligently tried to establish genealogical tables of a considerable depth to examine whether the system of rotating shrines, which I had proven existed in the Bulsa people, existed in a similar way among the Koma. Among the Bulsa, shrines are inherited by the eldest brother of the shrine-holder, and only when there are no longer any brothers does the oldest son of any of these brothers inherit it. After some generations of inheritance, the number of classificatory brothers and sons (SoSo, SoSoSo, etc.) who are entitled to the office of the shrine-holder increases immensely, and these brothers often live in different compounds. Thus the shrine and the office of the holder and sacrificer rotate throughout the compounds (in Wiaga-Badomsa there are about 50 compounds through which the shrines rotate; cf. Kröger 1982 and 2003).

The genealogical knowledge of the Koma is not very extensive and never exceeds the time of their immigration from their settlements in Mamprusiland into the present area at the end of the 19th century. Too rashly I concluded that without a thorough genealogical knowledge a rotation of shrines and offices in larger lineage segments might be impossible. This presumption was certainly wrong.

In 2003 Salifu Mumuni, my assistant and co-operator, informed me that Ginggangnaang (also called Asani), the old-aged rainmaker (niwasiru) of Yikpabongo, had died, and a man from another compound, Alazi, had become his successor although Ginggangnaang had adult sons. The result of my inquiries about the rules of succession was that the rain-shrine and, along with it, the office of the rainmaker “rotated” through six compounds within the Barisi clan of Yikpabongo.

When I visited Yikpabongo in 2011, I decided to make the rules of succession, especially regarding the rain-shrine, my primary research subject. All of my informants agreed that the shrine rotated only within the six compounds of the Barisi lineage proper, not in the sub-lineage of Barisi-Latideng. I failed, however, to find out the common ancestor of these six compounds. During my research, when I tried to establish genealogical relationships between certain people of different compounds, I often heard the following answer: “A. calls B. his elder brother (or alternatively his father, son, etc.)” My first embarrassment about this, in my eyes, inexact answer (for, of course, the informant did not mean a biological brother) gave way to the recognition that herein lay the solution to my problem, namely finding the genealogical relationship between persons. Further inquiries revealed that nearly every male adult of one lineage could say which male adult (e.g. of another compound) was his (classificatory) “elder brother”, “younger brother”, “son”, “father”, “grandfather (FaFa)”, etc., which means that the knowledge about the membership to a certain generation had not been lost, and this knowledge, without knowing one’s common ancestor, is completely sufficient for establishing rules of succession.

After this recognition I changed my method of research and asked questions like these: Who was the rainmaker before Ginggananaang? Who will be rainmaker after Alazi? What do you call this person (father, son, etc.)? In this way I could establish six lists of rainmakers which, ideally, should be identical. However this was not the case. All my informants were sure about the names of Alazi’s immediate predecessors and successors, but the further they moved from the acting rainmaker into the past or the future, the greater the discrepancy in their information. Informants, especially those of the younger generation, probably had no thorough insight into the line of succession.

My next step of research was to establish the relationship of the informants to the past and future office-holders. Here the generational affiliations could also not be listed without some inconsistencies among my informants, but nevertheless the principle of succession was established in an unmistakable way.

In the genealogical table, as presented below, the patrilineal ancestors of the present Barisi elders are arranged in such a way that names in the same line represent men of the same generation (although the common ancestor of all is not known). The numbers before some of the names refer to the list of shrine-holders according to Bukari, the adult son of the late Ginggangnaang.

Assumed names of ancestors before the immigration into Yikpabongo and the names of small boys at the end of the waiting list are left out here. Bukari’s list of rainmakers differs from those of others (e.g. Alazi and Zakaria) in that he does not mention Bafara (or Nwayeli, which may be another name for the same person).

Alazi and Zakaria, who are regarded as experts in matters of rainmaking and rainmakers gave me a list of rainmakers that differs in some points from Bakuri’s. 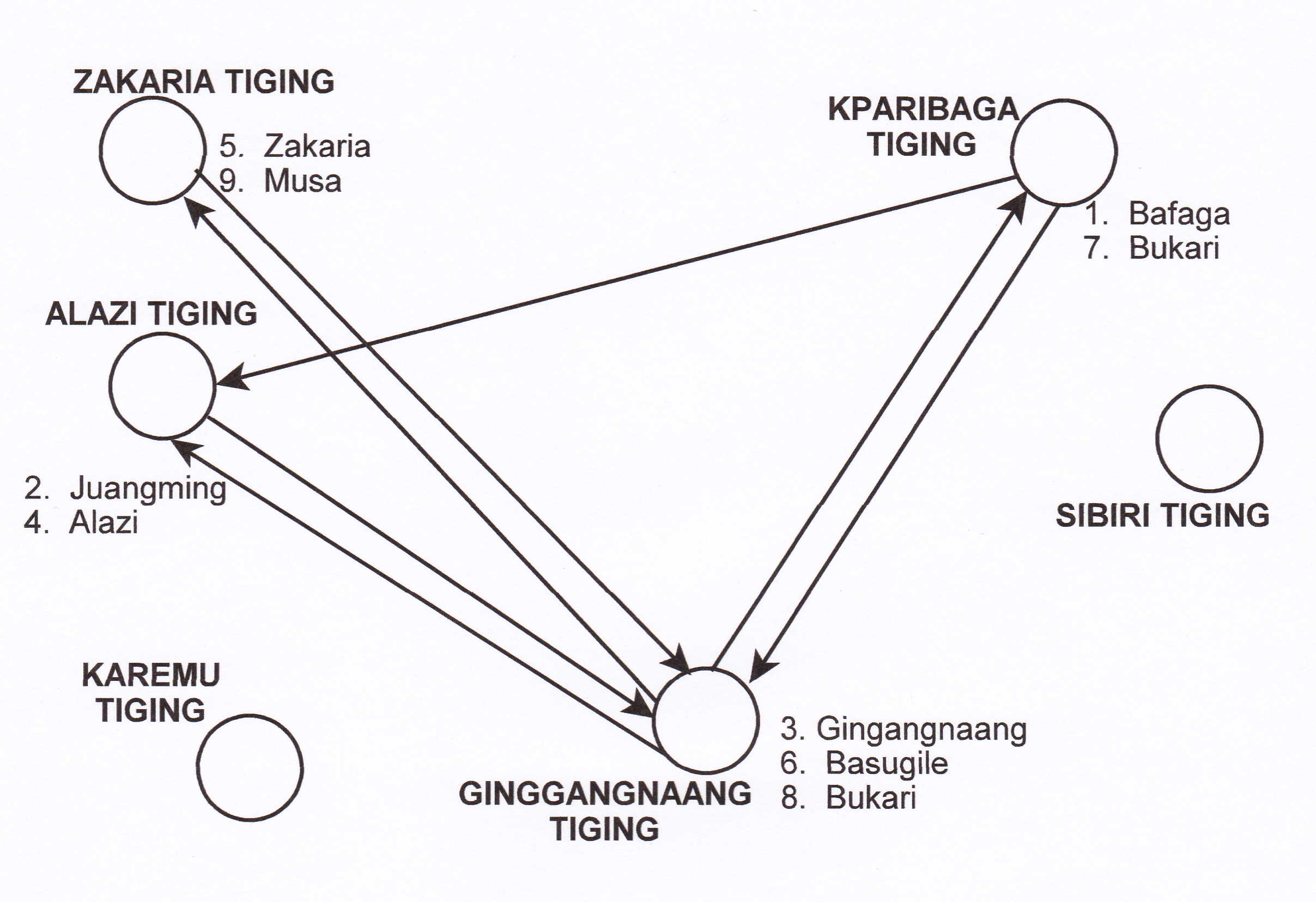 Zakaria’s information was used to demonstrate the rotation of the rain-shrine and the office of its holder through four Yikpabongo compounds on a map.

The map demonstrates that the rain-shrine, even according to information given by Karemu, had never been in Karemu Tiging nor in Sibiri Tiging, although everybody assured me that they are potential houses for receiving the shrine. My own interpretation of this is that the shrine-candidates of these two houses, in spite of their old age, belong to a younger generation and thus can hardly survive their turn at receiving the shrine.

The examination of the rotating rain-shrine in Yikpabongo supports my hypothesis that the rotation of shrines according to the principle of seniority is very common (if not universal) among the ethnic groups of Northern Ghana.